How to Conduct an Effective Interview

How to Conduct an Effective Interview

A question that I’m frequently asked is “How do I know that the person I’m interviewing is going to be the same person I’m going to get if I hire them?”  This is an acknowledgment of what we all know subliminally, that people are on their best behavior during an interview.  What people are asking me is “How do I conduct an effective interview?” In mission 2, we discussed how the use of assessments can help you develop an elite team.  However, assessments can only augment an interview, not replace them.  Whether you use assessments or not, it is absolutely critical that we know how to interview.

An effective interview is one of the keys to hiring well. If we fail to hire well, we usually know within the first 30 to 60 days. Unfortunately, at that point, we tend to be invested in our new hire. We kid ourselves and keep giving them chances to improve.  We become determined to make it work out. We divert time, energy and resources in an attempt to mitigate the new hire’s shortcomings.

I remember one bad hire I made years ago.  I kept them on for about 18 months after I realized they weren’t cutting it.   This is common and the real problem is they usually know it.  No matter how positive you are with them, they aren’t happy because no one likes to do a bad job.

Usually, one of two things happen.  Either A) your employee gets fed up with you trying to hold them accountable to something that they’re not really capable of doing and they decide to make the change, almost always at the worst possible time or B) you finally get fed up with the under-performing employee and you let them go.

In either case, 18 to 24 months later, you’re looking for a replacement.  18 – 24 months of underperformance.  During this time your customers have suffered less than ideal service and the rest of your team had to pick up the slack.  This is why hiring right is absolutely critical. 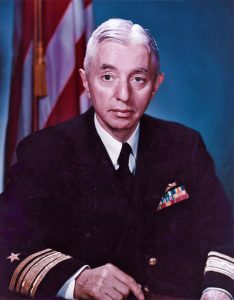 The first step in when designing an effective interview is simulating the working environment.   Admiral Hyman Rickover, the father of the nuclear navy, was famous for this. The nuclear Navy is a high-stress environment where people need to make decisions under conditions with lives are at stake, even during peacetime. If a nuclear submarine has a problem when it’s underwater, it can’t necessarily surface and give its position away, especially in the early days when the cold world was hot.   So, Admiral Rickover made his interviews especially stressful.

Imagine yourself, a junior officer, already nervous because you are interviewing with an Admiral.  You sit down in the chair in front of his desk and realize that the blinds are adjusted so the sun is directly in your eyes, causing you to squint.  Your eyes are watering as the Admiral starts to ask you difficult questions.  Then, you feel yourself slowly sliding forward off the front of the chair because the front legs had 6 inches cut off, angling it forward.  The entire time, you are remembering stories you’ve heard from previous applicants who were banished to a closet for hours because they gave, what the Admiral believed to be, a stupid answer to one of his questions.

Now, most of us have a more affable and relaxed environment than a nuclear submarine. We need to create that environment during the interview.

Before we discuss how to make a candidate relax, there is something we all need to understand.  When I said earlier that candidates are on their best behavior during the interview, this means that if you’re seeing things that are concerning during the interview, don’t think it’s going to get better, it won’t and it’s probably going to get worse. This is them at their best. Whatever it is that concerns you should be considered a red flag and needs to be explored.  Then, trust your gut.

Getting the Candidate to Relax

Alright, with that understanding, our first job is to get the candidate to relax.  When someone goes into an interview they’re keyed up, they’re going to sit on the edge of the seat. They lean forward, erect, looking you in the eyes. They’re alert.

Like an athlete, picture a centerfielder getting ready to break on the ball.  They’ve got that same sort of tension.  When you see that, you know they are mentally engaged. The problem is you also know they’re measuring every word that comes out of their mouth.

Unfortunately, once hired, they’re not going to be working in that kind of environment.  In order to judge them properly, you have got to get them to sit back and relax.

The way you do that is the same way you would in a sales situation or anytime you’re trying to build rapport with someone.   You get them to relax by asking them questions, about themselves, that allows them to brag.

I like to start every interview by saying to the candidate “tell me about yourself.” Most of the time they’ll respond with a litany of their career highlights.  If they do, I interrupt them, “No we’ll get to your resume, I want to know about you.  Who are you? What do you do for fun?”.  In other words, I purposely engage in small talk, centered around them, not me.

Use body mirroring and active listening techniques and chat with them until you start to see their body language change. You should see their shoulders come down, they may sit back and you will see the tension leave their body. Hopefully, you share a few laughs.  If you could get them to perhaps give you some sort of emotional response, that tells you that there’s some connection, some trust.  When people trust you, they’re going to open up to you.

If they aren’t relaxing, try mirroring their body language, sit forward and erect like they do for a few minutes.  If their arms are crossed, cross yours.  Match their speech pattern and cadence.  Don’t make it obvious.  People like people like them.  This creates a sympathetic reaction in them they will be unaware of.  After a few minutes, test the connection by doing something out of context like scratching your nose.  If they respond by scratching their nose, you’ve established a connection.  Then sit back and relax and they should do the same.

Once you get them relaxed, that’s when you can now start to dig deep into your interviews with the questions that you really want to ask.

Questions about their character, their values, etc. We’ll talk more about that in another mission but the first step is put them into an environment that will match the working environment.

For most of us, that means get them to relax or, if they are going to be in a stressful situation, put them in stress, put them in the environment and see how they do.